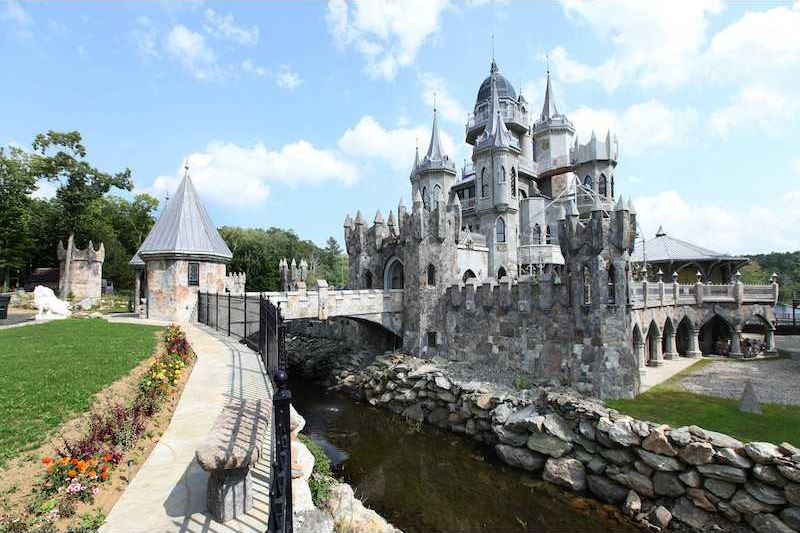 I’ve seen a good number of modern US homes made to look like castles, but this Connecticut listing takes the cake. 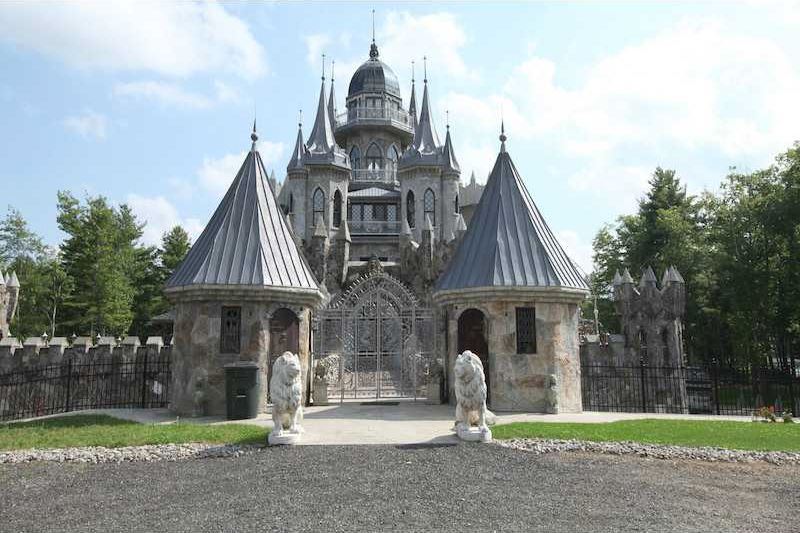 Half an acre… That’s not the lot size, that’s the size of the house. It sits on 75 acres, which includes most of a very large pond. 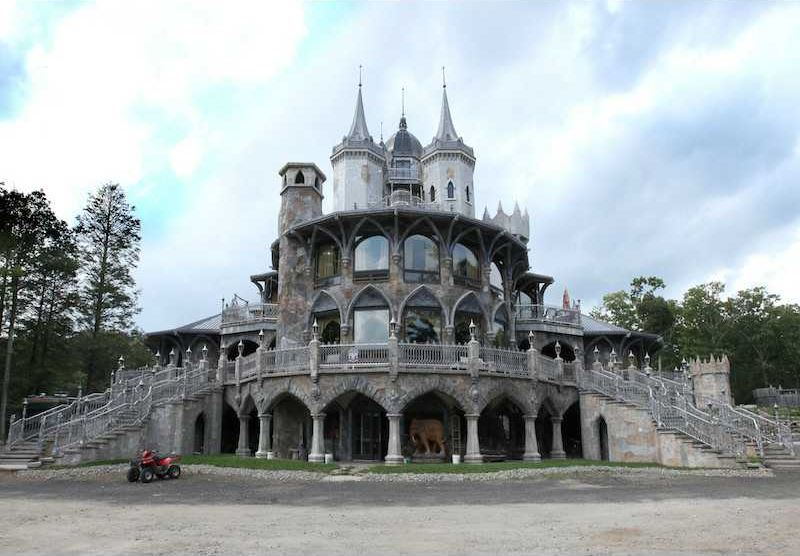 It doesn’t let up inside. Check out the sky painted on the ceiling in the kitchen: 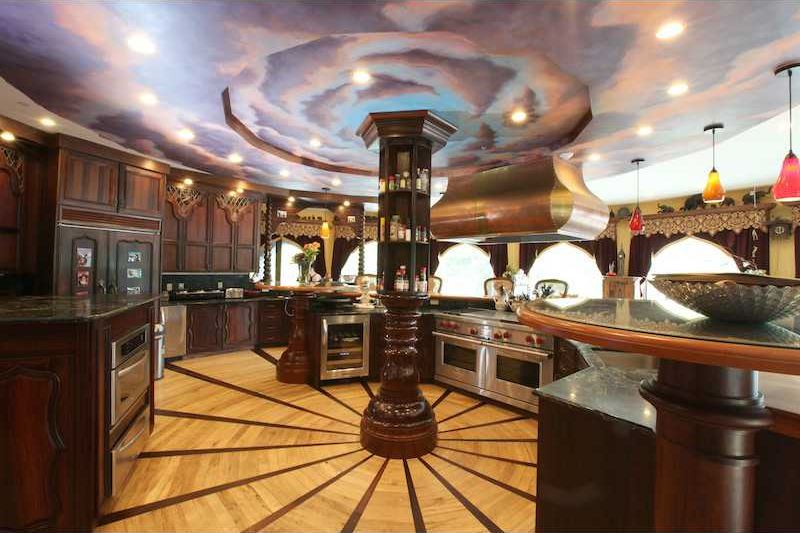 Am I really looking at someone’s home here, or is this some kind of amusement park? 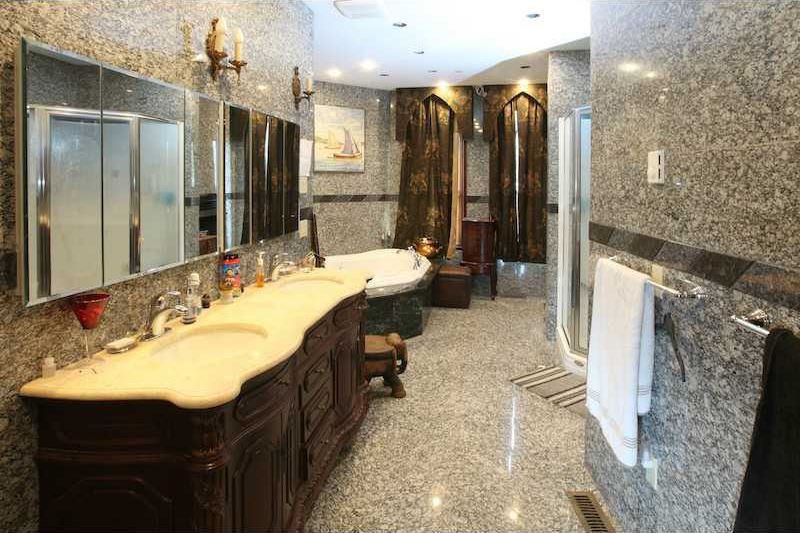 I found this flyover of the property on YouTube:

From the sounds of the stories of this place I found strewn across the Internet, the home and its owner have a… let’s say “colorful” history:

$45 million would probably pay quite a bit of past-due child support.

Here are some choice quotes from a few of the above articles:

Until recently, a Web site, www.castle-models.com, advertised that an international modeling agency was operating at the castle, which is in a residential area. The Web site displayed pictures of young women listing their “ethnic look,” measurements and details such as the number of piercings and tattoos they have.

An excerpt from the mission statement listed on the Web site said, “Just one look at the shapely form of beautiful women brings about physiological changes that our senses will not allow our minds to deceive, nor pretend does not exist. And with the laws of attraction in hand, comes desire, intrigue, and lust, which man has learned to exploit and sell as if it were a commodity.”

The Web site listed a rate of $125 per hour for a model to do a photo shoot, with a two-hour minimum requirement.

Whoa, that isn’t slimy at all.

If this waiver were to be granted it would be, in my opinion, the first step in a long carefully planned out process of turning this property into a cross between the Playboy mansion and Disneyland. … The castle is reported to have a TV and media studio where they can broadcast “live webcasts”. Did I mention the shower large enough for parties or the glass floor, the zoo or the 50’ bar? Do you see a pattern here?

Totally on the up-and-up.

The animals on the castle property also came up in the [2010 divorce] case. Mark has long run a nonprofit refuge for exotic animals called Wilderness Kingdom, Inc. Since 2004, the property has been licensed by the U.S. Department of Agriculture as a traveling zoo.

When a camel died in 2010, both Mark and Galt alleged the other was neglectful. In a motion filed on June 25, 2010, Galt claimed “the animals are not being properly taken care of” and “a camel on the property has recently died.”

In an email to Galt written on July 3, 2010, Mark countered that “when you sent the workers home and animals were not fed for 4 days, the camel lost a lot of weight since and died last week.”

Not sure how a castle this size can be a “traveling zoo,” but okay, whatever.

“I designed it and manufactured a lot of the components, it was a struggle building,” [owner Christopher Mark] says of the castle. But he’s clearly reluctant to provide more information about his unusual home. He asks if he could have someone cowrite the story with me. He says, “I’m worried because there’s been so much BS written about it.”

After I say no to a cowriter, he says he’ll call me back. He doesn’t. Three days later I try him again. Mark answers and again is friendly without providing details about the castle. He says he will have someone call me back later. Two days pass. I call again. No answer. About a week later I call one more time, a woman answers and says Mark will call back, he doesn’t.

Yeah, it’s all “BS.” So of course why would the owner be interested in sharing the truth?

Anyway he’s obviously tired of dealing with such a terrible burden, so why doesn’t someone just take this place off his hands. Come on, forty-five million bucks is a bargain you guys.

It’s All In The Details

Um… yeah… They sure do like their hangy-downy stuff…

Bro do you even loft?

Lair of the Evil Genius

Move Over Ron Howard… to the house right next door.

Put a Blur On It

Pour Out The Sinks

Who Needs Furniture (Or Walls)?

Mirror, Mirror on the… Ceiling?